FishingPiers.INFO is the most comprehensive list of fishing piers on the internet with over 400 fishing piers listed alphabetically by region and state. For the past 5 years we have been working to identify, map, and find information on each of these fishing piers. Use the Map to the Left or find your state below to get started! Tight Lines.

Tybee Beach Fishing Pier is located on the south east side of Tybee Island, Georgia. This pier is free for fishermen and spectators. They also allow for beer on the beach. There is a lot of people swimming so the best fishing can be found towards the end of the pier. This is a great option for an afternoon of fishing or a way to get away for a few hours.

The Redington Long Pier goes 1,200 feet into the Gulf of Mexico and offers good fishing. The pier has started to become warn down with several people complaining about pier structure and bathrooms not being cleaned. There is also a pretty high price for parking and fishing. “The Pier is a priceless historic landmark that was first built in 1962 in the Town of Redington Shores, Florida. In 2007, the Pier underwent an extensive renovation project which involved the construction of all new pilings, deck-expansions, and complete board refurbishing. The property covers a 100-foot frontage of the beach shore and the parking lot property spans 31,800 square feet (.77 acres). The structure is also equipped with a large tackle shop, concession stand, several shelters, benches, and restrooms. 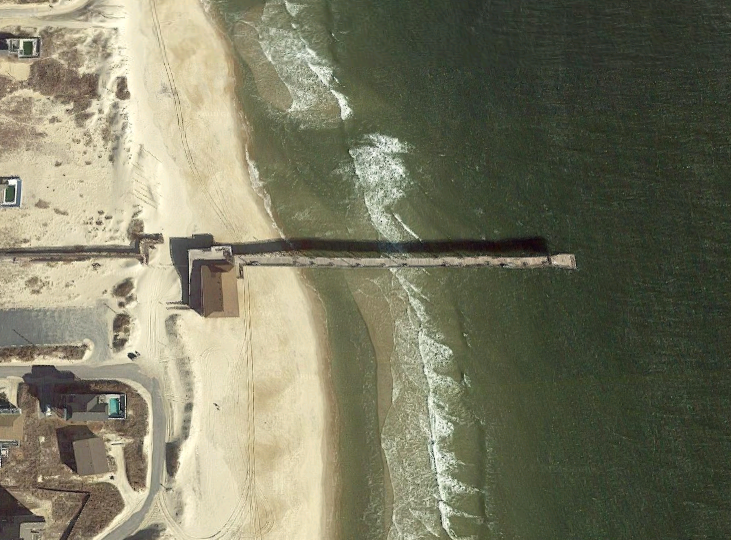 Rodanthe Fishing Pier is also known as Hattaras Island Fishing Pier. This pier was originally built in the 1970s and has battled several hurricanes. Currently, the pier is 700 feet long with a wide fishing deck at the end for Kingfishing. This pier offers excellent fishing for huge Redfish and Kingfish to even the occasional Cobia and Tarpon. Rodanthe Fishing Pier is located on Hattaras Island and offers a wide variety of fishing options as well as entertainment and restaurants. This past year a portion of the pier was destroyed, but due to the generosity of fisherman like you the end of the pier was rebuilt. 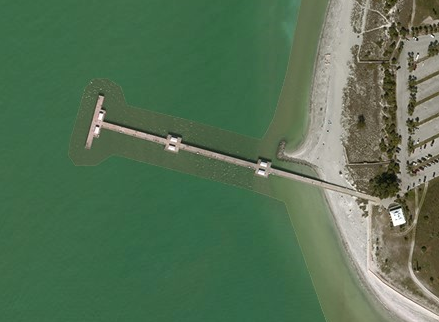 If you are looking for a fishing pier that offers excellent fishing in the Puget Sound this may be one of our favorites. The Dash Point Park Fishing Pier is uniquely situated over a section of the Puget Sound between Poverty Bay and Commencement Bay. Prized for the annual Salmon runs this pier is over the deeper water and situated on a point that allows Salmon and other fish to congregate depending on the incoming or outgoing tides. The majority of Salmon caught from the Dash Point Fishing Pier are Silver, Pink, and Chinook Salmon heading directly for Commencement Bay and into Puyallup River. During July is when the first run of King Salmon will make their way to Puyallup River and will hit max numbers in August. Following the King Salmon will be the Silver Salmon as they start to make their way to Puyallup River. 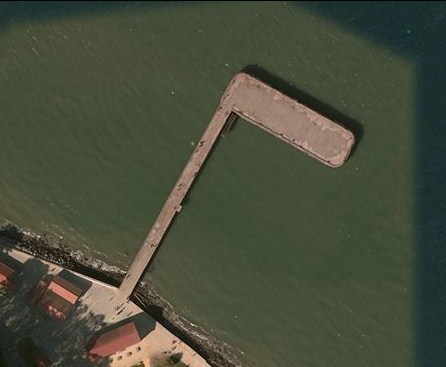 Fort Point Fishing Pier is located in the Fort Point National Park and offers a spectacular view of the Golden Gate Bridge. The history of Fort Point is remarkable and since 1769 there has been a fort of some sort on the southern side of San Francisco Bay. This piece of land provided a high level of military significance and has been controlled by the Spanish military, Mexican army, and finally the US army after being taken over in 1848. During the gold rush and several following wars the fort provided protection to the crucial trading port of San Francisco. When the Golden Gate Bridge was being constructed in the 1930s there were originally plans to destroy Fort Point, but Joseph Strauss favored Fort Point so much that he redrew the plans. The fishing pier consists of both wooden and concrete sections and covers a sandy bottom with a lot of debris and rocks. Fishing here can be very successful for the full variety of San Francisco Bay species such as White croaker, flounder, striped bass, and Salmon. Remember that while crabbing is allowed in the Bay for Red Crab and Rock Crab, you cannot keep Dungeness crab! 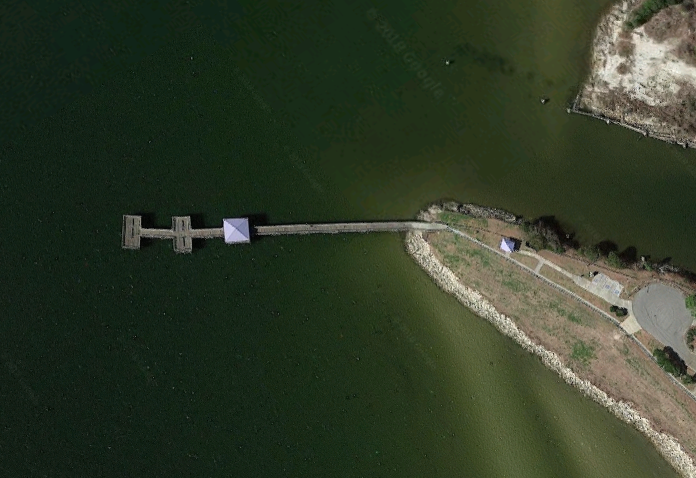 Sunset Point Fishing Pier is located on the northern side of Lake Pontchartrain. Sunset Point Fishing Pier provides excellent fishing for Redfish, Black Drum, and Trout. During the summer months the runoff from the tributaries slows down and allows the salinity levels in Lake Pontchartrain to increase. The entire lake averages at 10-14 feet in depth. Baitfish in from the ocean are followed by the big Reds and Sea Trout. This is one of the nicer fishing pies in Louisiana with running water sinks, covered pavilions, night lights, public restrooms, and plenty of fish. 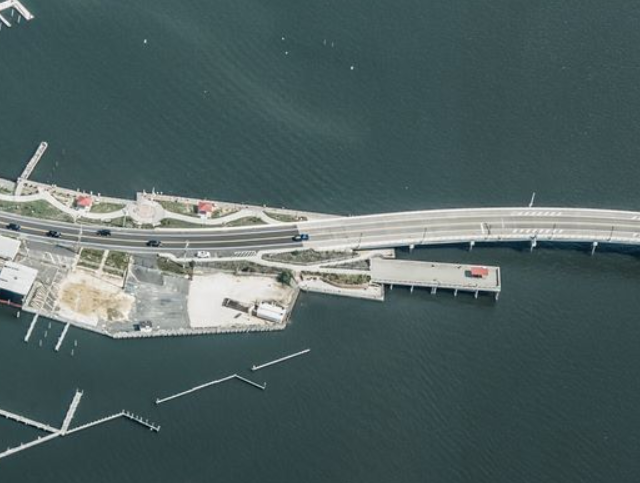 Mantoloking Bridge Fishing Pier County Park was opened in the summer of 2012 at a cost of $1.4 million, but severely damaged by Hurricane Sandy and was officially reopened in July 25, 2013. The Mantoloking Fishing Pier County Park is made of two fishing piers, one that is 70 feet and a second fishing pier at 152 feet long and was originally part of the old bridge that was torn down in 2006. Open year round this park is 2.5 acres on the Barnegat Bay and provides a number of amenities such as sun shade gazebo, lighted paths, bathrooms, boat launch, bait cutting stations, picnic benches, large playground,and parking spaces. The primary fish that will be caught from the pier will be snapper bluefish, pufferfish, striped bass, and occasional fluke. 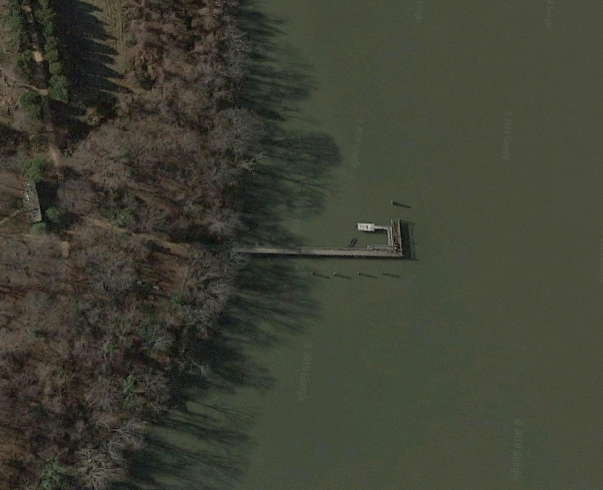 The Accokeek Foundation Fishing Pier is also known as the Saylor Grove Fishing Pier which is approximately 250 feet long and extends into the Potomac River. In 1955 Congresswoman Frances Payne Bolton purchased the 485-acre farm across the Potomac from Mount Vernon to save it from development as an oil tank farm. Shortly thereafter the Accokeek Foundation was established established as a living demonstration of 18th century Tidewater farming and husbandry. The water depth near the fishing pier varies between 8 feet at high tide and 6 feet at low tide. There is also a metal pontoon for boating.